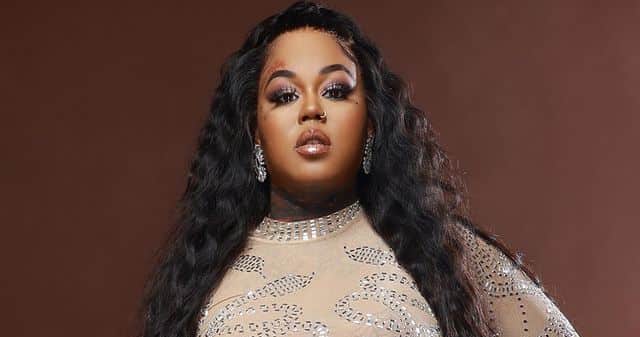 Who is Jucee Froot?

Terrica Shanice Alexander known popularly as Jucee Froot is a 27-year-old American female rapper from Memphis, Tennessee. She is best known for her contributions to the soundtracks of many films and television shows, including “Eat Itself” from Insecure, “Down in the Valley” from P-Valley, and “Danger” from Birds of Prey (2020).

This article contains information about Jucee Froot such as her biography, age, real name, family background, her child’s name, net worth, and other facts about her. But before we proceed let’s have a look at her profile summary below.

Jucee Froot was born Terrica Shanice Alexander on July 12, 1994 in Memphis, Tennessee, United States of America. She holds an American nationality and belongs to black ethnicity. According to astrologers, her birth sign is Cancer.

Jucee Froot grew up writing songs and playing the piano. She distinguished herself once she began rapping by creating her own hooks and moving between tough rhymes and melodious singing.

That adaptable mentality was initially showcased on her debut mixtape, 2015’s “Diamond in the Rough” produced by Loyal 100 Entertainment, which included fellow Memphis emcee Young Dolph.

It Might Interest You To Know About Cuban Doll Biography, Age, Net Worth, Boyfriend, Height, Wiki

The next year, she released Jackin for Beats, which featured a cover of Drake’s “Hotline Bling.” Starting with Dripping Diamonds, 2017 saw a flurry of releases. She then released Concrete Rose and Rich Girl, before finishing the year with King of Memphis.

She released a pair of long-players in 2019 — Sextape and Schizophrenic Flow — in addition to the emotional track “Live On,” which she wrote in memory of her late boyfriend who was gunned down in 2015.

She made her public debut after signing with Atlantic Records, when her buzzing single “Danger” was strategically placed on the all-female feature soundtrack for 2020’s Birds of Prey. Black Sheep, her full-length debut with the company, was released in March of that year.

The album featured Rico Nasty, A Boogie wit da Hoodie, and Juicy J, as well as the popular tune “Sidewalk.” She added the song “Eat Itself” to Insecure: Music from the HBO Original Series, Season 4 as Black Sheep grew in popularity.

Below is a list of some songs from the Tennessee native.

Jucee Froot’s boyfriend “Calvin Wilhite” popularly known as “Yung Coo” was shot dead in his hometown on May 25, 2015. Calvin Wilhite who was shot dead thrice served in the US Army for 8 years and was expecting his son when the incident happened.

Jucee Froot lost her first child (son) in 2018. On January 1st, 2021 she gave birth to her first daughter (second child) whom she named Zariah YaYa. She released a YouTube video about her pregnancy. Watch below.

Jucee Froot has made lots of money from her music career and she is living a comfortable lifestyle with her child Zariah. It is reported that she has an estimated net worth of $1 million approximately.