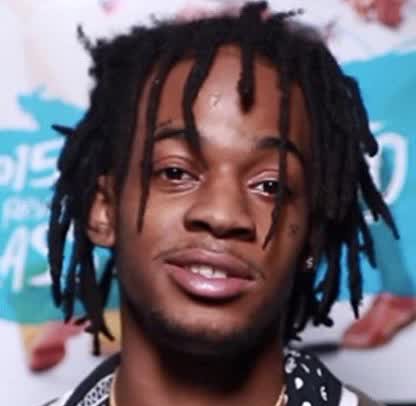 Thouxanbanfauni (pronounced “Thousand-Ban-Fawnee“) is a 28-year-old American rapper popularly known for his hit songs “Ultra Violet”, “American Muscle” and as well as his collaboration with American rapper Playboi Carti and UnoTheActivist.

This article talks about American rapper “Thouxanbanfauni” and in it, we will be covering his biography, age, career, net worth, family background, and other facts about him. Before we proceed let’s have a look at his profile summary below.

Thouxanbanfauni was born Taajwar Hakeem Latimore in Chattanooga, Hamilton County, Tennessee, United States on October 3, 1993. But, he grew up in Atlanta, Georgia. Thou holds an American nationality and his ethnicity is Black / African. As of August 2022, he is 28 years old.

For now, information regarding his parents, siblings, and educational background is yet to be revealed to the public.

Thouxanbanfauni began releasing songs under the moniker Taaj Keem, Fauni Taaj Keem, or Fauni in the early 2010s. The song “Rihanna Wrist,” was his first official release as Thouxanbanfauni, it was made available on SoundCloud on March 19, 2015. He released “For Christ Sake”, a mixtape he made alongside UnoTheActivist, in July of that same year.

“Requiem”, Fauni’s album, was scheduled for release in April 2018, but it was delayed due to a studio fire. He published “The Lost Files” on June 1 to make up for “Requiem”. The album “The Lost Files” is a collection of earlier songs that have been uploaded to Thou’s SoundCloud. The release of “Requiem” came on August 6, 2018.

The sequel to Fauni’s and UnoTheActivist’s first joint production, “For Christ Sake 2”, was released on February 22 to kick off 2019. Two singles, “Choppa Down” on January 25 and “Pay Me” on February 8, served as the album’s lead singles.

Then, on April 30, Fauni released the first song from his next album, “Interstellar,” followed by “Numbers” on May 19, and “Not for Nobody” on July 12. Along with those songs, Lil Yachty and Fauni released the promotional single “REUNION,” which put an end to their quarrel.

This prompted the release of the EP “SEEIN COLORS” on August 2. His second EP, titled October 34th, was released on November 8 to round off the year. “Best of Me” and “Diet Plans,” released on October 18 and November 1, respectively, served as its lead singles.

Fauni released three singles in the first few months of 2020. He released “North Side South Side” on January 31 with UnoTheActivist. He released “Help Me” on February 14 and later “Holcomb Bridge”.

When it comes to discussing his private life, especially his romantic life, Thouxanbanfauni has exercised extreme caution. Because of this, we are unable to determine his current relationship status.

This American rapper has a height measurement standing at 5 feet 6 inches tall and weighs about 62 kilograms.

Thouxanbanfaun is well-known for his diversity in terms of rapping and creative skills, and as a result, he has amassed a significant amount of wealth. But for the time being, his net worth is yet to be estimated.