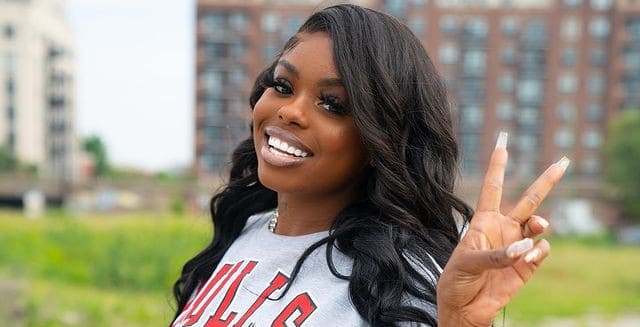 Dreezy (age 28 in 2022) whose real name is Seandrea Sledge is an American rapper, singer, songwriter and actress from Chicago Illinois. She is popularly known for her singles “Body”, “Schizo” and her album “No Hard Feelings”.

This article contains information about Dreezy such as her age, bio, real name, career, net worth and other facts about her but before we proceed let’s first of all have a look at her profile summary below.

Dreezy was born on March 28, 1994 in Chicago, Illinois. As of 2022, she is 28 years old and celebrates her birthday every year on March 28. Her real name is Seandrea Sledge. She holds an American nationality and belongs to Black ethnicity.

Talking about Dreezy’s family and educational background, we discovered that she hasn’t actually revealed any information concerning this areas of her personal life. This post will be updated once these informations have been made available.

Before fame Dreezy encountered a lot of challenges during her childhood days. To curb some of these challenges she began engaging in some activities such as poetry writing and fine arts which helped her to deal with some of those pressing issues.

When she was 10 years old she picked interest in music and started singing. She was able to express herself clearly and used her singing to escape from the challenges she faced.

At age 14 she now put her interest in rap music. She mentioned American rappers J. Cole and Lil Wayne as her major influence into rap music.

After much work and effort in her career she became good friends with Chicago born rapper Sasha Go Hard, and was featured as a guest on Sasha’s song titled “I Ain’t No Hitta” in 2012.

Later on she worked on a song with rapper Lil Durk titled “Ghost”. And in 2013 she released a collaborative mixtape with rapper “Mikey Dollaz” titled “Business N Pleasure”

In 2014, Dreezy gained much attention when she did a remix of Nicki Minaj and Lil Herb’s “Chiraq”. Her breakthrough came through this remix as some fans claimed her song better than the original.

The attention she got from this remix gave her the opportunity to collaborate with rapper “Common” on his tenth studio album “Nobody’s Smiling”. In addition she got signed into Interscope Records.

Apart from music Dreezy is also an actress. She appeared as the character ” Queen Cabrini” in a 2019 Netflix film titled “Beats”.

Dreezy is a successful and accomplished American rapper. Due to her popularity she sure has secret admirers.

In the past she was known to have been in a relationship with American singer Jacquees. The two singers ended their relationship in 2020 and for now the current si of Dreezy is unknown.

This beautiful American singer has a height measurement standing at 5 feet 4 inches tall and she weighs about 65kg.

Dreezy is an accomplished American female rapper who has made a name for herself in the American music industry. She has accumulated huge amounts of money from her music and is living a comfortable lifestyle. It is reported that she has an estimated net worth of $2.5 million approximately.

For now she hasn’t made mention of any of her assets.