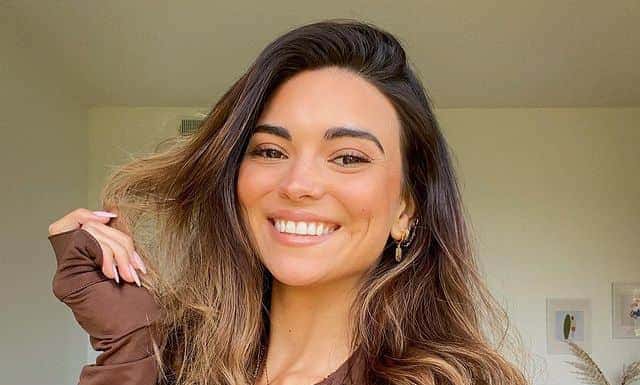 Who is Kyra Santoro?

Kyra Santoro is an American model, actress, and singer from Calabasas, California who gained fame for her appearance in ‘Sports Illustrated Swimsuit Issue‘ in 2016. She is also known for her modeling works in magazines such as “Maxim Mexico”, “Seventeen”, and others.

In this article, I will be sharing with you Kyra Santoro’s biography, age net worth, and other facts about her but first let’s have a look at her profile summary below.

Kyra Santoro was born on March 23, 1993 in Calabasas, California, United States of America. As of 2022, she is 29 years old and celebrates her birthday every year on March 23. She holds an American nationality and belongs to white ethnicity. Her birth sign is Aries.

Talking about her family, Kyra grew up in Calabasas with her parents and her two brothers. As of the time of writing this article the names of her parents and siblings are yet to be disclosed.

Kyra was an adventurous kid. When she was young she picked interest in outdoor activities such as riding dirt bikes, skateboarding, wakeboarding and surfing which she learnt from her father who was already an experienced surfer.

During her days as a surfer she was invited to also try out in modeling events and in 2012 she was featured as Miss October by TransWorld Surf and from there she started gaining recognition.

Kyra fame started growing when she started making television appearances. She appeared on the entertainment website “The Chive”. She also modeled for magazines such as  “Men’s Health”, “Maxim” and “Seventeen Magazine”, “Bella Mag” and “GQ”.

In 2016 she gained more fame when she appeared on ‘Sports Illustrated Swimsuit Issue‘.

Likewise in 2019 she started her musical career.

This American model, actress, and singer has a height measurement standing at 5 feet 7 inches tall and weighs about 58kg.

According to some online publications it is reported that Kyra was in a relationship with social media personality Brennen Taylor. For now her current status hasn’t been revealed.

Kyra Santoro is among most of the successful models in the fashion industry. She has an estimated net worth of $1 million USD approximately.