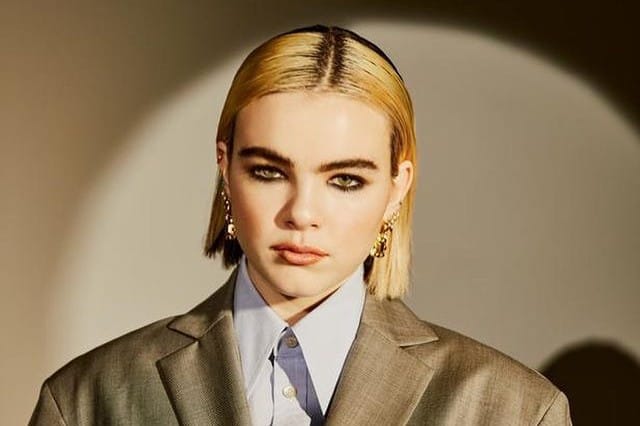 Benee age 21 in 2021 is a New Zealand award-winning singer and songwriter writer from Auckland popularly known for her hit songs such as “Afterthought”, “Supalonely”, “Glitter”, “Soaked” and others. She released her debut album “Hey u x” in November, 2020.

In this post I will be sharing with you Benee biography, age, real name, net worth and other facts about her but first let’s have a look at her profile summary below.

Benee real name is Stella Rose Bennett, she was born on January 30, 2000 in Grey Lynn, Auckland, New Zealand into a musical family. She is currently 21 years old and celebrates her birthday every year on January 30.

For now she hasn’t revealed the names of her parents to the public. She holds a New Zealand nationality and belongs to white ethnicity. Her zodiac/birth sign is Aquarius.

After completing her primary education she attended an all girls Catholic school, St Mary’s College and then proceeded into Auckland University of Technology to study Communications but later she dropped out of school of school to focus fully on music.

Benee started her music career at age 8 while in primary school where she first off all learnt how to play the guitar and and then in high school she took saxophone lessons. Eventually she gave up music to become a professional Water Polo player with the hopes of representing New Zealand competitively.

However when she was 17 years old she picked back her interest in writing and recording music. She started posting on her music on the music platform “SoundCloud” which eventually caught the attention of music producer and member of the band “Leisure” Josh Fountain who she worked with to release her 2017 debut single “Tough Guy” and her 2018 single “Soaked”.

On June 28, 2019 she released her debut EP “Fire on Marzz” under the moniker Bene which later added an extra e due to copyright and pronunciation issues. Prior to the release of her EP she was signed into “Republic Records” and also supported Lily Allen in her “No Shame Tour”.

On November 15, 2019 she released her second EP “Stella & Steve” which contained the single “Supalonely” that went viral in March 2020 on TikTok due to a dance challenge. In June 2020 “Supalonely” got over 250 million streams before she made her first on-screen appearance performing the song on “The Tonight Show”.

In October 2020 Benee formed her own record label “Olive” and on the 15th of the same month she released her debut album “Hey U X”.

Below are some songs by this New Zealand artist.

In November 2019 Benee EP “Fire on Marzz” won her the award for Best Solo Artist at the 2019 New Zealand Music Awards. She also won awards for Single of the Year with “Soaked”, Best Breakthrough Artist and Best Pop Artist.

In October 2020, Benee was nominated for Best New Artist at the 2020 People’s Choice Awards. That same year she was announced as the winner of the 2020 APRA Silver Scroll Award for the song “Glitter”.

She also won Best New Zealand Act at the 2020 MTV Europe Music Awards, where she was also nominated for Best New Act and Best Push Act.

Benee won Single of the Year (for “Supalonely”), Best Solo Artist and Best Pop Artist for the second consecutive year at the 2020 Aotearoa Music Awards.

Benee revealed in an interview for “The New Zealand Herald” that she has Dyslexia (reading disorder).

Benee is an accomplished New Zealand singer and songwriter who for sure has secret admirers. She was previously ended a long term relationship with her boyfriend before moving to Los Angeles in April 2019.

Currently as it stands Benee hasn’t revealed her relationship status to the public.

This New Zealand singer and songwriter has a height measurement standing at 5 feet 8 inches tall and she weighs about 60kg.

Benee is an award-winning singer and songwriter who has made a name for herself in the New Zealand entertainment industry and the world at large. She has an estimated net worth of $5 million USD approximately.