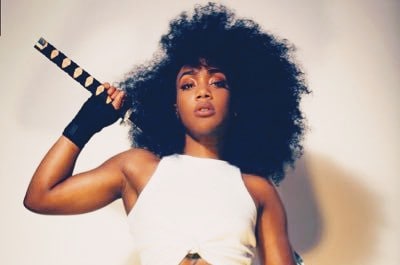 Shaina West is a 25-year-old British Ghanian actress, self taught martial artist, stunt person and a certified personal trainer popularly known as “TheSamurider” on Instagram. She casted in Marvel’s movie “Black Widow” which was released on July 9, 2021.

In this post I will be writing about Shaina West biography, accident and other facts about her but before we proceed let’s quickly have a look at her profile summary below.

Shaina West is a British actress from Ghana, she was born on the 23rd of August 1997. As of 2022, she is 25 years old. For now details concerning her parents, family and educational background are yet to be revealed to the public. However she holds a Ghanaian nationality and belongs to African ethnicity.

Shaina West is known for her role in Marvel’s blockbuster movie “Black Widow“. This will be her first project as an actress and also her first on-screen appearance.

This movie is expected to help strengthen her name as an actress and martial artist in the entertainment industry.

Shaina West was involved in a motorcycle accident when she was 20 years old. This led to tragic events occurring in our life during that period, she lost her job and her boyfriend broke up with her.

When being interviewed this is what Shaina West said:

“When I was 20 the unthinkable happened. I was in a terrible motorbike accident. It left me stranded in hospital for weeks with a fractured neck and broken thumb. My boyfriend at the time broke up with me and I lost my job. All I had left was a passion for Japanese culture including, anime.

I spent all of my time with these strong characters who could perform amazing feats and solve their problems through the actions of their bodies, I was inspired. I got out of my casts and back into the gym, and on my 21st birthday I got a tattoo which would remind me to be strong, do what I love and fight for what I believe in. It was from that day that I decided to teach myself martial arts and, in spirit, be like the anime characters that made me want to feel… heroic. And thus, ‘The Samurider’ was born.”

Coupling the tragic events that occurred in Shaina’s life during her early 20’s and all she had to go through during that period gave birth to a real life super hero, an alter-ego Known as The Samurider.

Shaina West was previously in a relationship with a boyfriend who broke up with her when she had a motor cycle accident. For now she hasn’t made her current status known to the public.

Shaina has a beautiful slim body and has a height measurement standing at 5 feet 4 inches tall and weighs about 57kg (125 lbs).

Shaina West is a mixed-martial artist and actress who has accomplished a lot especially after the incident that happened to her. She has an estimated net worth of $1 million USD approximately.

Shaina is also a media celebrity popularly known as “TheSamurider” in all her social media handles. She has over 576k followers on Instagram and over 21.4k Twitter followers.