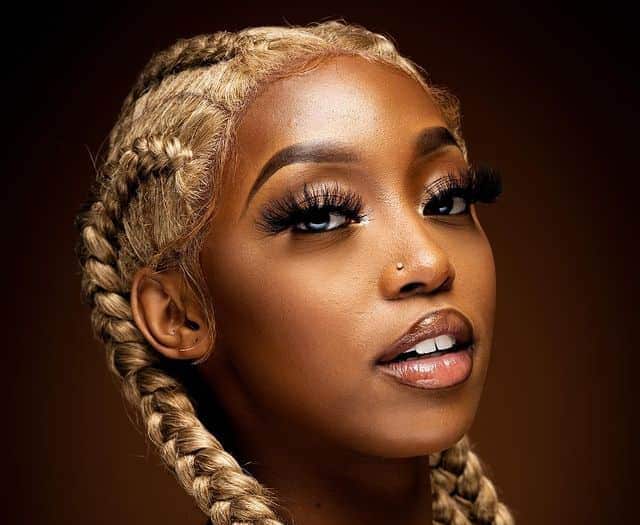 Kamo Mphela is a 22-year-old South African singer and dancer from Durban, SA. She rose to fame as a dancer through frequent posting of her dance videos on her social media accounts.

This article contains information about Kamo Mphela such as her biography, age, net worth, career, family and other facts about her. Before we proceed lets have a look at her profile summary below.

Kamo Mphela was born Kamogelo Mphela on November 29, 1999 in Durban, South Africa but she grew up in Emdeni, Soweto. She holds a South African nationality and belongs to the black ethnicity.

This South African media personality celebrates her birthday every year on November 29 and right now, she is 22 years old.

As of the time this article was written, information about Mphela parents and family members are yet to be revealed to the general public.

Kamo Mphela love for dancing began at a young age, when she would accompany her father, who worked at YFM (Youth Radio Station 99.2), to events where she would perform on stage and dance, eventually leading to wider exposure through live performances.

She tried acting before pursuing her dancing profession and got an opportunity to be an extra on the TV soap Isibaya, but she soon realized it wasn’t for her and began performing as a dancer at concerts. Her dancing prowess earned her the title of “Queen of Amapiano.”

Mphela began her music career in 2019. She was signed to Major League Music in and released her EP, titled “Twentee”, that same year.

She also released songs like “Suka” “Emabozen” and “Menemene”, as well as collaborating with South African singer Busiswa on the song “Sbwl” and appearing on MFR Soulz’s single “Amanikiniki”, which ranked #1 on Good Hope FM’s SA House Music Top 10 Chart.

Mphela has also collaborated and performed with local artists like Nadia Nakai and Killer Kau. “Sukendleleni” and “Labantwana Ama Uber” are two amapiano songs in which she appears as a singer and dancer.

Kamo is rumoured to be in a relationship with South African rapper and singer Focalistic. This rumour was triggered due to a screenshot of a video call she had made with Focalistic was shared on social media.

However Kamo and Focalistic are yet to say anything concerning this matter.

In 2020 during the DSTV Mzansi Viewer’s Choice Awards (DSTV MVCA). Mphela was seen leaving the stage after just coming in.

It is reported that the South African personality suffered a wardrobe malfunction. According to her she said,

“I felt my pants rip the first time but decided to continue thinking it’s not bad , when I heard them rip again I knew I had to get off stage,”

“At that time all I could think of, was in order to survive this I needed to get off stage in respect of the audience at home and my industry peers.”

This South African dancer and singer hasn’t shared her height and weight measurements with the public. But from her appearance she appears to be about 5 feet 4 inches tall.

Kamo Mphela has made fame and wealth due to her amazing performances. It is reported that she has an estimated net worth of $300,000 dollars approximately.