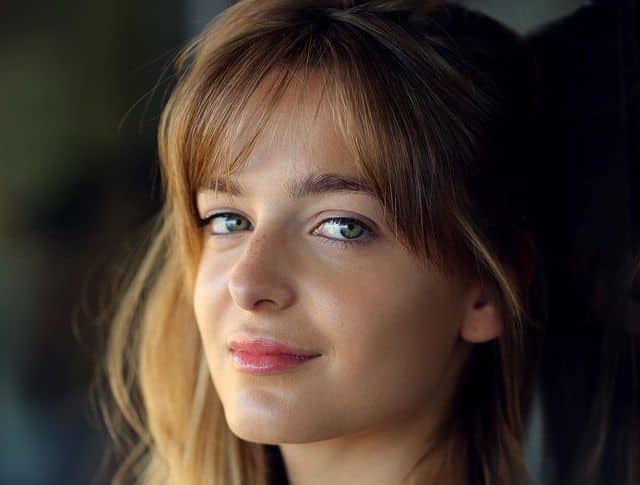 Céline Buckens is a 26-year-old Belgian British actress who rose to fame for her teen role as Emilie in Steven Spielberg’s 2011 film “War Horse” and Netflix series “Free Rein” as Mia MacDonald.

This article contains information about Céline Buckens such as her biography, age, career, net worth, family and other facts about her. Before we proceed let’s have a look at her profile summary below.

Céline Buckens was born Margaret Céline Buckens on August 9, 1996 in Brussels, Belgium. When she was young, she relocated to the United Kingdom with her family. Céline celebrates her birthday every year on August 9 and right now she is 26 years old.

In respect to her nationality, she holds a Belgian identity and belongs to the white (Caucasian) ethnicity.

Céline Buckens attended St Mary’s School and Thomas’s London Day Schools. She went on to study History at the London School of Economics and Political Science, and while there, she appeared in Free Rein.

As of the time this article was written, information about Céline’s parents and her family background are yet to be disclosed to the public.

Buckens made her acting debut in 2011 when she played the role of Émilie in Steven Spielberg’s film “War Horse”.

She auditioned twice before getting the role. Buckens then played Vanessa Kentworth in the short film The Rain Collector in 2015.

Buckens played Mia MacDonald in the Netflix drama series “Free Rein” from 2017 to 2019. In 2017, she played Daisy Bennett in an episode of the ITV drama “Endeavour”.

It Might Interest You To Know About Carla Woodcock Biography

She played the lead character Elsa in the French short film “Ne M’oublie Pas” (English: Forget Me Not) in 2018.

Buckens also played Annalise in the drama thriller “The Good Liar” in November 2019. Earlier that year she was confirmed to have joined the main cast of the Cinemax action series “Warrior”. Beginning from the second series she took on the role of Sophie Mercer.

She starred as Talitha Campbell in the BBC legal drama Showtrial in 2021. Buckens also made her directorial debut in 2021, directing the short film Prangover, for which she won Best Director at the North East International Film Festival in the same year.

In 2012, Céline Buckens was nominated for Best Female Newcomer at Empire Awards. And then in 2021 she won she won Best Director at the North East International Film Festival .

In terms of her relationship status, she hasn’t said anything about it yet. And also we have no information about the actress’ previous relationships.

This Belgian-British actress has a height measurement standing at 5 feet 4 inches tall and she weighs about 50kg.

Céline Buckens has made lots of money and had acquired wealth throughout the course of her career. Currently, the stunning actress earns money from a variety of sponsors an endorsements. At the moment her net worth is estimated at $550,000 dollars approximately.