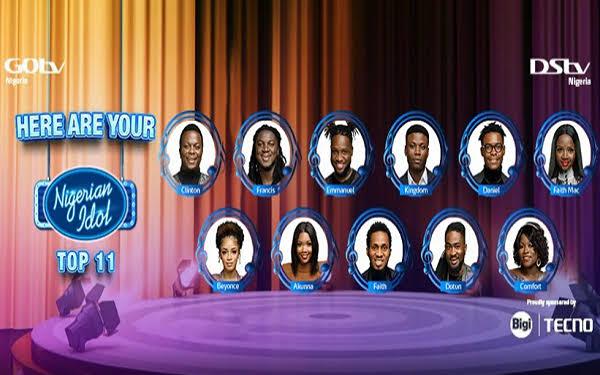 Before we get to know our Contestants for this year’s edition. Lets get a little introduction about the Tv reality show.

Nigerian Idol is a television reality show with a nationwide search for Nigeria’s next solo superstar, which will offer one young talent the opportunity that raw talented singers have until now, only dreamed of. Nigerian idol aims to find the best singer in the country who can be defined as the National singer and International Artiste. This year’s edition kick-started on the 14th of March 2021.

After series of auditioning and screening, let’s meet and get to know the lucky 11 contestants who made it this far.

Beyonce is fresh from high school she is aged 16 and resides in Port Harcourt. She has had her eyes set on her musical career. Having a dad who was a professional singer and producer made the decision a lot easier for Beyonce to choose this career path. From posting videos of herself singing online to hitting Ariana Grande’s notes in the shower, Beyonce is focused on becoming a singer to be reckoned with. With a name like hers, she knows she has big shoes to fill and believes she can be the next Nigerian Idol. She hopes she can inspire the youth to chase their dreams, no matter how impossible it may seem.

Clinton (24) is an office assistant but has a burning passion for music. He grew up singing in the church choir and as a background vocalist in a gospel band. Clinton has performed alongside major artists at concerts, so he isn’t new to the spotlight. Clinton comes from a polygamous family, but he was raised by his mother after his parents separated. He enjoys being the only singer and songwriter in his family and says it has always been a dream to be seen on the Nigerian Idol stage. Now, he gets to live his dream…

Akunna is a corporate and Entertainment Lawyer. She comes from a singing family where everyone has amazing voices. She spends most of her time in the bathroom singing and also showcases her vocal talent on her various social media platforms. Akunna believes its time for the world to hear her sing and that it’s about time she commercializes her amazing gift.

This young graphic designer takes his musical art with him everywhere he goes. Whether in church or the neighborhood bar, Daniel is sure to get on stage and sing. Daniel says he entered Nigerian Idol for the experience and exposure and hopes the platform the show provides will help showcase his talent and take him to the next level.

Actor and entrepreneur Dotun is a jack of many trades, but his heart will always want what it wants- music! His passion for expressing himself through song has him singing at events, karaoke bars, studios, and in church. Dotun comes from a large family and holds the “coveted” position of being the black sheep of the family. He says he entered Nigerian Idol in the hopes that the experience will propel his music career and his other entertainment pursuits to the next level.

Comfort (18) is a student in Lagos. She started singing in church and composes her own original songs influenced by everything around her. To her, music is life.
She says she has been watching Nigerian Idol with admiration from a tender age and now that she’s old enough to be one of the contestants, she hopes to find out how it feels to be the ultimate winner of the singing competition.

Faith (25) hasn’t only embraced his singing talent; he also earns a living from it! From performing at award dinners and pageant shows to parties, weddings, and open lounges, this enterprising young man is making sure his craft puts money in the bank. The last of six children, Faith grew up with the love and support of a family that shared his passion for music and helped hone his singing skills from the age of seven. Apart from music, guitar, and his love for education, his artwork and passion for helping people means the world to him. After watching his favorite artists perform on previous seasons of Nigerian Idol, Faith says he always believed that one day he would make it onto the same stage – and now is his chance to achieve his big musical dreams.

This energetic go-getter currently works as an administrative officer at a studio in Lagos. He has a passion for music and believes if you sing from the heart, you will communicate and connect with your audience. He is intent on making people feel how he feels through his songs. Raised by his dad after his mum passed away, Emmanuel is the second child in a family of four and takes pride in the fact that he comes from a family of singers. . Emmanuel says he entered Nigerian Idol so he can share his talent with the world.

This computer science and informatics student at the Federal University Otuoke, Bayelsa State is no stranger to singing. Kingdom sings with the Pamela Scott Music band based in Port Harcourt and has performed at wedding ceremonies, birthday parties, and church services. He comes from a family of four and has a younger brother and two younger sisters. Apart from the fact that he is surrounded by people who believe in him, Kingdom thinks he has what it takes to be the next Nigerian Idol because music is what he is most passionate about.

Despite her keen interest in fashion design, Faith still has her mindset on taking on the musical stage. Born into a family of singers, Faith started off in the church and soon became the lead vocalist in her church choir. Not a fan of hiding her vocal prowess, Faith shows the world what she is made of with video uploads on her Instagram account of herself singing.

Francis (26) is based in Abuja where he doubles as a businessman and a farmer – and crowns it with the gift of singing, which he started in the church. Francis comes from a very supportive and loving family of seven kids. Francis says being on the Nigerian Idol stage has been a lifelong dream. Even after auditioning twice in Abuja and Lagos in 2011 and 2015 respectively and not making it far, he believes this new opportunity will give him another shot at the limelight and help give his career a much-needed boost.

There you have it, these are the 11 contestants who are contesting to be the next Nigerian Idol. Who is your favourite let’s here it in the comment section below.